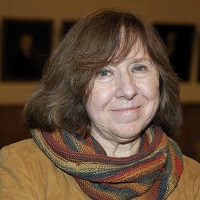 Reality is More Powerful than Literature

I used to think I could understand everything and express everything. Or almost everything. I remember when I was writing my book about the war in Afghanistan, Zinky Boys, I went to Afghanistan and they showed me some of the foreign weapons that had been captured from the Afghan fighters. I was amazed at how perfect their forms were, how perfectly a human thought had been expressed. There was an officer standing next to me and he said, "If someone were to step on this Italian mine that you say is so pretty it looks like a Christmas decoration, there would be nothing left of them but a bucket of meat. You'd have to scrape them off the ground with a spoon." When I sat down to write this, it was the first time I thought, "Is this something I should say?" I had been raised on great Russian literature, I thought you could go very very far, and so I wrote about that meat. But the Zone — it's a separate world, a world within the rest of the world — and it's more powerful than anything literature has to say.

Svetlana Alexievich, in 'Voices from Chernobyl: The Oral History of a Nuclear Disaster'

Voices from Chernobyl: The Oral History of a Nuclear Disaster